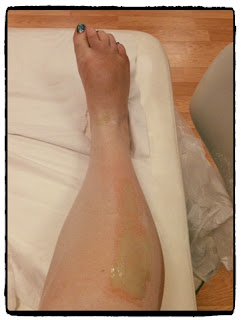 So I thought I'd share with you my experience of waxing both as a waxer and waxee (which isn't a word so maybe "victim" is more appropriate)  Previously i've had two areas waxed, my eyebrows and my upper lip, both in the last two years and I still have my lip waxed regularly after years of bleaching it (with the Veet facial bleach kit which I highly recommend for fair haired people)

I did once attempt to wax under my arm myself - I think I was around 16 years old and clearly thought it was going to be easy.  I used one of those pre-loaded strips that you just peel off the top and slap on... but then I didnt have the courage to rip it off so it stayed stuck on until I had managed to peel all around the edge and slowly lift it away from my skin. I think now that it was hilarious to have no experience of waxing but to choose under my arm to wax first !! crazy !!

Fast-forward to around 3 years ago I think... I had decided to try out having my eyebrows waxed.  The beauty therapist was someone that had been coming to me for a while and I remember after she did one I just about managed to bear getting the other one done but once she'd done it I told her she could book me in for it again !! The same happened with my lip... to me it hurts more than eyebrows but the end result is amazing so I will put up with it...

Fast-forward again to a couple of hours ago... we were taught the process and technique and then it was just down to us in pairs to wax each others legs.  My friend was saying how much it hurt but I kept going because I figured if I gave her a choice she might say stop !!  The key is to rip it off fast without any hesitation and to place pressure with your hand on the area as soon as its ripped off which definitely relieves the immediate pain.

When we came to my turn... I started to get nervous... very nervous.  I only shaved my legs on Monday so I knew I didnt have anything to really wax but the idea was to get the technique.  I have to say that I honestly think that it didnt hurt as much as I had imagined.  I think you build it up to be the worse possible pain so when it actually happens there's alot of relief !!  My friend was pretty gutted that I didnt have much to wax so after a few strips we moved on to my forearms...ouch.  Whilst she ripped the strip off I would hold the skin on my arm tight from underneath which helped.  I found that little strips of wax were better than a big strip coming off at once.  I have to say I LOVE the end result, it's well worth it!!  I keep looking at how lovely and smooth they are.  Apparently whereever you have waxed that you haven't been waxed before will always hurt more the first time around as the hairs aren't used to being pulled from the root so... lets look forward to next time !!