Its funny how one day you look at yourself in the mirror like you've done a million times before and suddenly realise something different.  One day I realised that I naturally have quite red cheeks and this is why my blush always looks different on me than others.  I saw an advert for the L'Oreal Paris Nude Magique CC Creams and since it was available in three different types, Anti-Redness, Anti-Fatigue and Anti-Dullness I decided to order the Anti-Redness and Anti-Dullness versions. 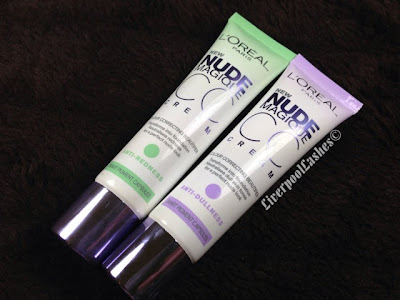 As always when I returned from Boots I already had my make up so I opened up the tubes and applied a little blob to my hand.  I already knew that the Anti-Redness version would come out of the tube green and the Anti-Dullness version would come out of the tube purple but I was amazed at when I started to rub it into my hand the colour changed into a foundation sort of shade.  I thought to myself 'they really are magique!' 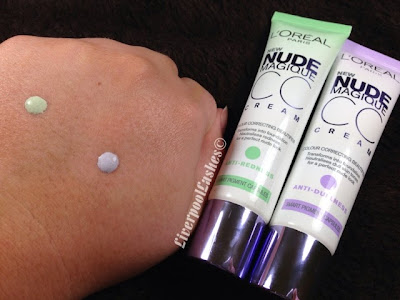 The next day I decided to try the Anti-Redness version out but as I applied it to my cheeks first and blended it I realised it was far too dark for my skintone but covered the redness.  I blended it out further and it then matched my colouring but the redness came through underneath.  The Anti-Dullness version also does not match my skintone, its a little better but the whole point I wanted to test them was for the redness really.

The part about this product that I cant understand is that redness will show through more on paler skins.  When I tan whether it be on holiday or false tan it masks the redness anyway so why make a CC cream that the people will only fit the people that need it less?  I just dont understand it.

The bottom line is... I want this stuff to work.  I really do.  I will use it but try to sheer it out just to get rid of it.  It might be good for someone who is a medium skintone with a recent scar or mark that they want to cover but that going to be about it.