So todays post is going to be a pretty short one - short and Sweetie - okay okay I couldnt resist.  I went to the Trafford Centre with a friend and one of the items on my list was the Lush Big Shampoo.  While I was in there we had a full mooch around all of their products and found quite a few interesting items including their Sweetie Pie Shower Jelly.  With its dark appearance, the blue and purple sparkles and the scent described as 'cherries and coconut' we were both sold. 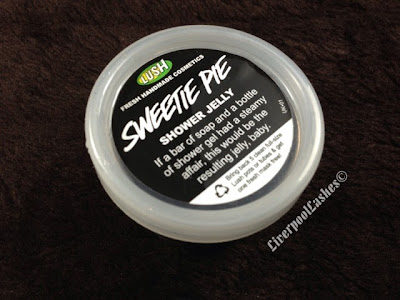 The texture is like jelly before you mix it with water.  Its quite structured and thick.  The lady in the shop advised us to use with a shower scrunchie netting thing (which i've just learnt is apparently called a shower puff.)  The best way that i've found it to rip off a small chunk, approximately a 10p coin size, open up the layers of netting and stuff it in there.  Then go under the water but holding the layers of netting closed over the chunk until it starts to lather and the scent engulfs you.  Believe me when I say this stuff lathers!!  I've heard others say that they've struggled to use it but I think if you use it how I do then there is no problem. 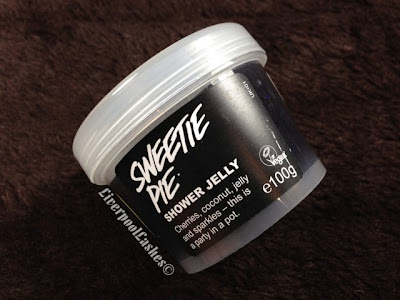 The tubs are £3.10 for 100g and £6.25 for 240g which initially I thought was a little steep but now I see how long thinh is going to last I would happily repurchase.  A plus side is Lush accept both the small and large tubs back for their '5 tubs for a free face mask' off.  Result!! 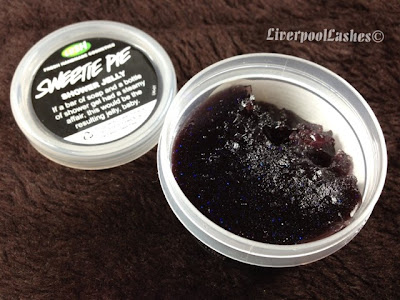 Email ThisBlogThis!Share to TwitterShare to FacebookShare to Pinterest
Labels: lush