Today's post is a collective haul from the past few weeks.  I think with the Christmas sales going on, I've been in Boots (or on their website!)  a little more than usual.

Also, hilariously Bezzie has gone from a girl who had a handful of make up (literally one mascara, one foundation and possibly a few lipsticks) to someone who walked into Superdrug with me on Saturday saying "I want to check blah blah lipstick" quoting the exact name of the shade like a true make up junkie.  I laughed hysterically as I blame myself for slowly wearing her down and succumbing to this world.  I laughed even harder when I looked into her hand and saw her holding three almost identical shades of lipstick and she was about to purchase all three. 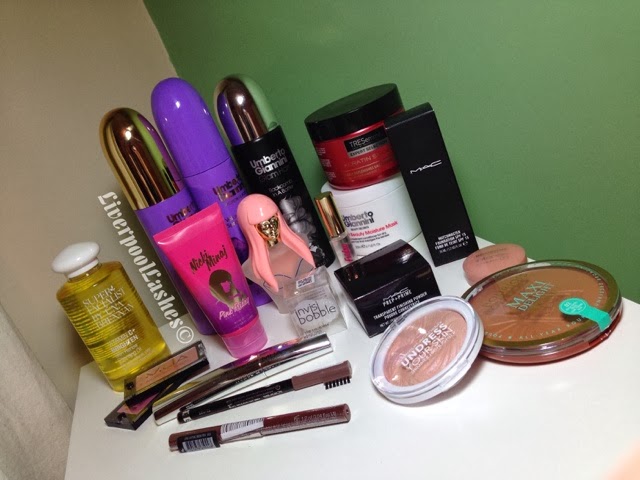 In true 'Karen fashion' I've filmed a video to show you each product.  Click here to watch the video.  If, however you're like Bezzie who reads the blog whilst she should be working and can't watch the video, I'll give you the lowdown of what I bought.

Starting with hair stuff.. I want to try some more shampoos and conditioning hair treatments in a quest for amazing hair.  I just feel like it's important to have good hair if you're a hairdresser, it's your best advertisement.  Along with that I bought Umberto Giannini Glam Hair Backcomb In A Bottle as I want to focus on getting volume without damaging my hair backcombing it.

I bought a couple of gift sets, one of them isn't in the above photo as it wouldn't fit but it was a Sanctuary Body Butter set which I already know I'm going to love.  The other one was the Nicki Minaj Pink Friday gift set that I told you about in yesterday's blog post.

I treated myself to the Super Facialist by Una Brennan Vitamin C Skin Renew Cleansing Oil as it's currently on offer and smells absolutely delicious.  The truth is I don't really need any more skincare right now but I have recently gotten through a few bottles so I justified that it was time to find new products!

I got two MAC items, a foundation which is their Matchmaster foundation and their Prep + Prime Finishing Powder which I have had many times before and really enjoy.

I also picked up a new Gosh Brow Pen which I have used many times before, this time I've gone for a slightly lighter shade to see if I like it any better.  I have a new Rimmel brow pencil to try also along with a Bourjois eyeshadow, Bourjois Bronzer (which GemsMaquillage mentioned as a 2013 favourite) plus four MUA items.

Now I have to be brutally honest here, I've never ventured into the world of MUA as I just didn't think anything that's £1 could not be good quality.  I was pleasantly surprised when swatching some of their range that it actually seemed pretty decent so I picked up a highlighter, a mascara and two blushes.

Anyway, that's all for the haul.  Hope you've enjoyed it!  Expect reviews of everything once I test them out.
Posted by Karen Carter at 9:00 am