Having only signed up to the You Beauty Discovery boxes around two weeks ago I was surprised to receive my second box from them.  I can only figure that I must have signed up just in time for their January edition and they ship them as soon as you've selected what you'd like.  Not long after I received the email to say that February's choices were available but it didn't dawn on me that as soon as I choose them they would ship the box.  I shall now expect that I wont hear from them until the 1st of March. 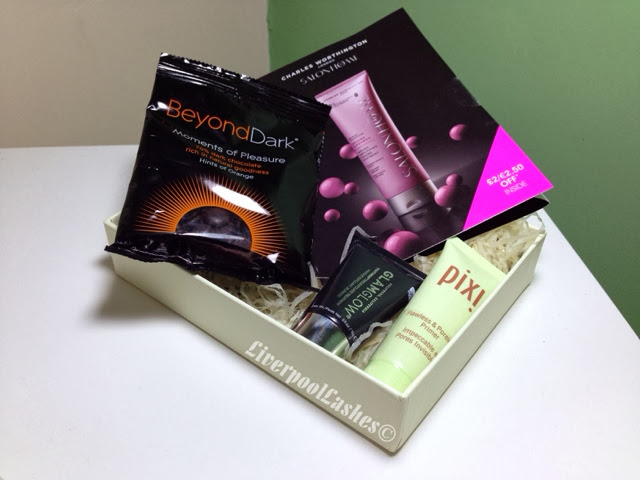 I do love the little box, its just so cute and refreshing to be different to it's competitors.  The boxes have less products but this is reflected in the price.

As usual there's a video - please click here to watch.

This months box was really exciting as it featured two brands that have a lot of buzz around them in the You Tube/Blogger world.  The first was GlamGlow, these masks are meant to be amazing although a little pricey so this is a good way to try them before you commit with your hard earned cash.

The second was Pixi which I did see in the States but at that point I had so many things that I'd purchased that I really couldn't get anymore.  I know that the hype is particularly around their toner but it's still brilliant to try something from them.

When I saw the Charles Worthington item it took me back to my teens.  I was obsessed with having everything from the brand and even bought their miniature shampoo and conditioners to take on holidays as they just felt so fancy to me.  I'm excited to see if this volumising product really lives up to the claims.

Overall I'm really pleased with the box, I think that you can't really expect a box with £25 or similar as you're paying under £7 for it and that's including the fancy packaging and posting it.  If the brands stay as good as this months box I'll be more than happy!
Posted by Karen Carter at 9:00 am