I've likened Holly Schippers' arrival to the UK to when you watch NORAD at Christmas time tracking Santa.  I follow her on Instagram (amongst other social media) and she's posted photos of her UK tour at each stop, getting nearer and nearer.  Yesterday it was finally time for the north west to be graced with her presence at Creative Academy+ Manchester.  I know some of you couldn't make it and since I was allowed to camp there for the day, I figured I'd bring you the low down of what went on and what we learnt because the morning session was different to the afternoon one and I suspect it's like that at each of her sessions. 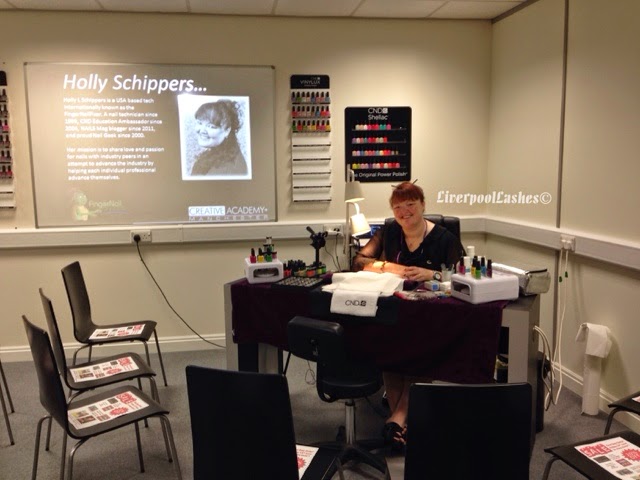 So once Holly had welcomed everyone in with one the warmest, friendliest smile I've ever seen, she launched into asking everyone to say their name, how long they've been in the industry and anything they would like to be shown how to do.  She made a note of every technique that you queried and ensured that everyone had their questions answered.

I'll start with a term coined by Holly herself, 'nail eyes.'  Holly explained that you can find inspiration in anything, you just need to use your nail eyes.  "Look at the patterns, prints and textures around you" she said and had us looking around the floor, taking photos.  You can upload these photos to the nail eyes Facebook page (click here) 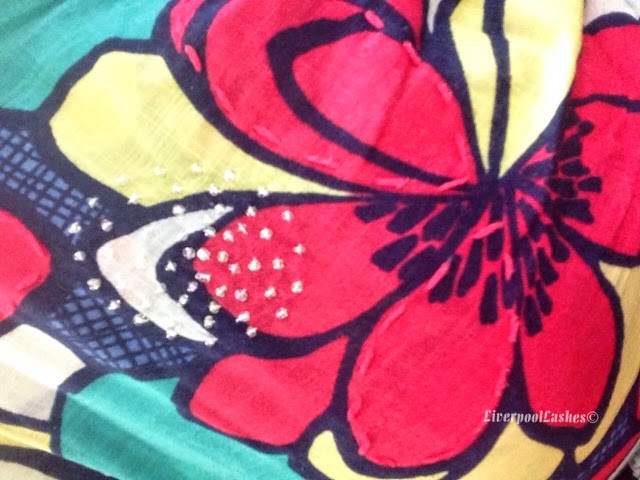 My dress yesterday, a perfect print for inspiration!

Holly spoke about referring to nail art as 'nail fashion' and when a client says that fancy some of it, you can say to them that you'll just look through your 'inspiration database' which I loved!  It just sounds fabulous!

I've tried to make a list of as many of the queries as possible with as much information as I can remembers so here goes...

Someone asking about full coverage foils and the secret to getting the patterned foils onto the nail completely whole.  Holly showed us how to do it using Irresistible Multi Colour Flower foil (which I ended up purchasing from the shop as a result of the demo!)  She applied her base coat, cured, Cream Puff, cured and then the foil rubbing all over the entire nail really thoroughly.  Then she explained that the trick to it is the remove the foil really quickly, a slow removal means that some of the foil will still be attached to the clear backing.

Holly showed us how to keep your Swarovski crystals looking super sparkly by applying them into uncured top coat, each with a tiny wiggle so that the top coat ever-so-slightly goes over the sides of the crystal.  Once they were cured, she then explained the 'claw' technique and the fact that just like jewellery, they need to be held in by claws therefore she then went around each stone placing a dot of top coat with a dotting tool in the four corners and then cured it.  She also told us to always try and flick the stones at the end of the service, just to ensure they're all correctly attached to avoid client disappointment when they leave the salon.

'Magic dots' were also shown by applying Cream Puff, then the  additives of your choice, dotting on top coat and then curing.  You then wipe the nail with D-Sperse which will remove the rest of additive that was not covered by top coat, and then apply a layer of top coat over the entire nail to seal it in. 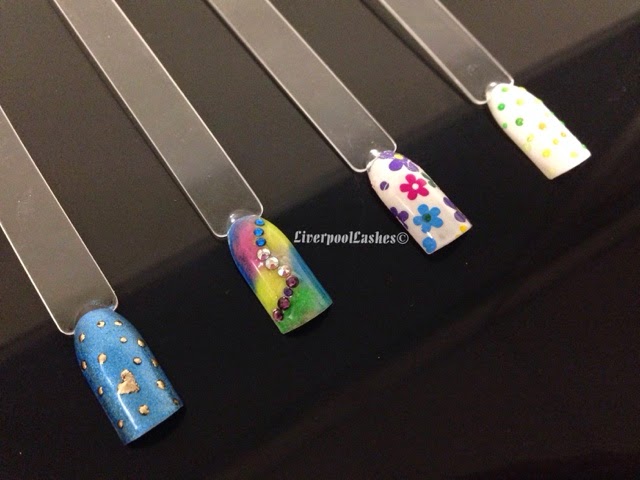 
A lady asked about how to get a clean French manicure so Holly showed to shake Cream Puff at an angle (not completely upside down.)  I think the best way to describe it in words is almost like clapping your hands with the bottle held in one hand.   Then she reminded you how to hold your client's finger in a way that pulls back the side walls allowing you to really get into the corner and begin with your smile line.  Holly likes to bring the brush from the side to the centre and then go to the other side and bring it back to the centre, cleaning up and refining with a gel brush if required.  I did record a short clip on my Instagram of this (click here) 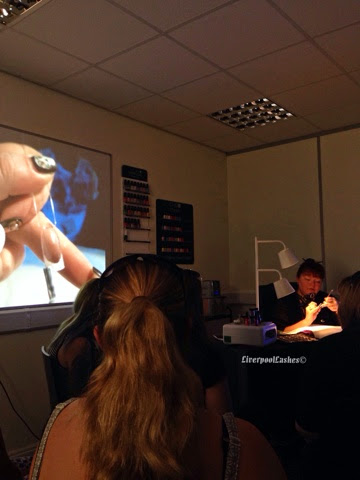 Another query was how to do swirls as typically, once you get past the half way point with the swirl, if you carry on going your brush will splay out and ruin the design.  Holly advised that the trick to this is stop when you're half away around, take your brush off to correct the direction of the bristles and then continued for another half swirl so you're basically doing little 'Cs,' stopping and then continuing with the next C going back up whilst getting smaller and smaller.
Someone queried how to carve into Shellac so she demonstrated how to use two contrasting colours to create a brilliant effect.  After applying a base coat, curing, one colour coat and curing, she then applied the contrasting colour and used a dotting tool to carve into the uncured Shellac.  This demo was with Silver Chrome and then Cerulean Sea over it which you have to try!  It was beautiful!

There was a quick question about how to get glittered sections perfectly, for moon manicures, french glitter tips, etc so Holly took a little top coat onto her thumb palette and applied some glitter into it to make a glitter paste.  She then used a gel brush and a dotting tool to create a design, curing and then finishing with a top coat.

One lady in the group queried how to do two tone colours across the nail from left to right so Holly demonstrated a patting motion using Irresistible Nail Shadows over a cured cream puff from yellow to pink which looked stunning. 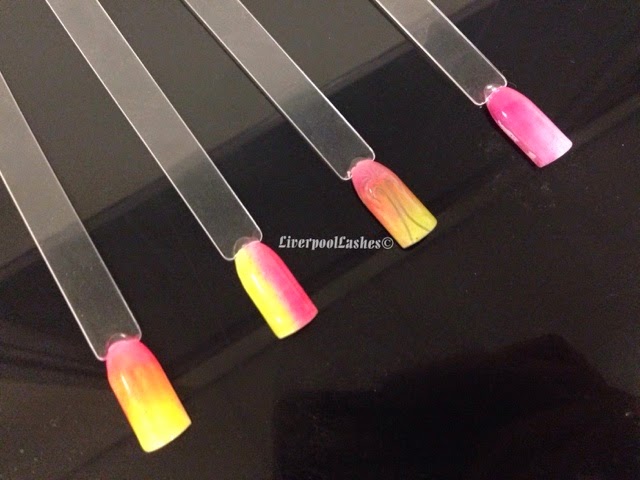 Another little trick Holly showed was to apply a top coat over Cream Puff and cure before using your additives as it gives a better finish.  She did show the neon pink additive with Black Pool over it carved so that the brightness of the pink popped through and I would imagine you would definitely need to do it for additives or you would carve into the additive as well.

Empower Nail Art was queried so Holly demonstrated it on one of the ladies.  She passed around a little piece of it so that everyone could feel how thin it is and how it moulds to the nail as you stretch it over the nail plate.  The finished look looked fantastic!

Another query was how to do some bridal nail art that was something a little different than the typical french polish.  Holly applied a sheer pink and then dotted white smile and around the moon manicure area.  Once it was cured she finished with the Shimmering Sands Additive. 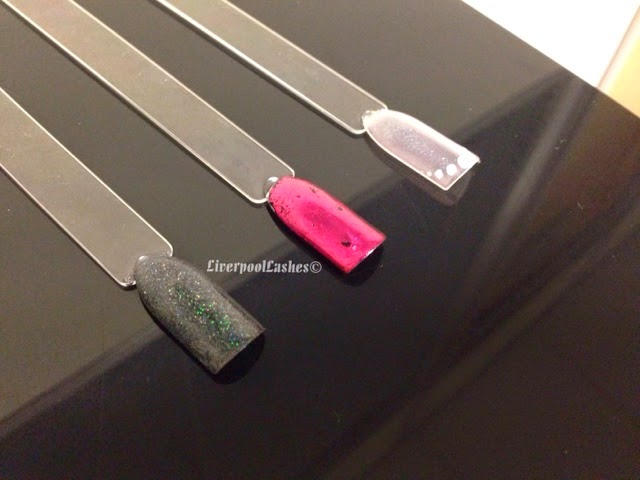 I'll finish this post with a couple of random pointers that I made a mental note over: 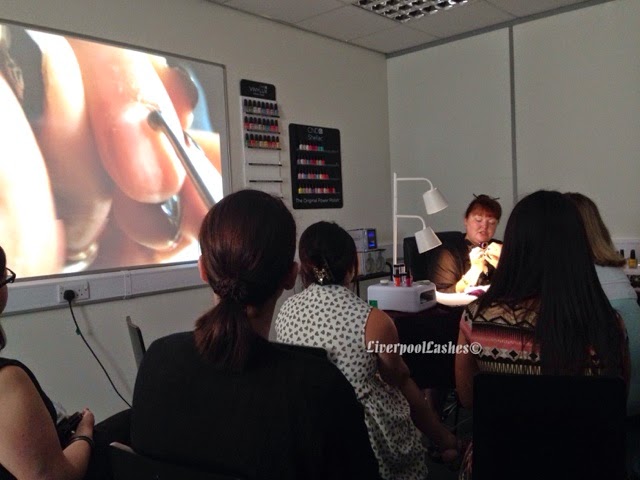 Overall the sessions were brilliant.  I think everyone yesterday left with a whole lot of fresh ideas for their businesses and a boost of positivity.

Holly has a presence about her, she's warm, honest and funny and it makes you want to listen to her.  If you didn't get to see her on this tour then I would definitely make sure that you do so whenever she's back over here as watching her will bring fresh ideas from across the pond is truly worth it. 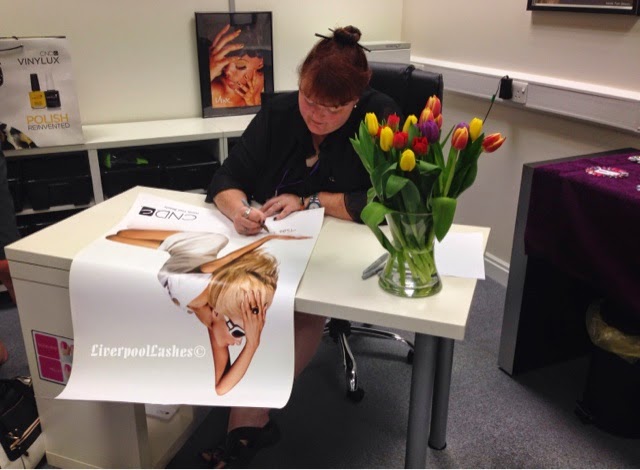 If you're not already, why not go and follow her on Facebook? click here and while you're there, if you did enjoy today's post I would love to have you as follower too on my page.  You can then keep to up date with my latest including my Shellac, Vinylux & Additives information for the Modern Folklore collection as and when the release date becomes official. 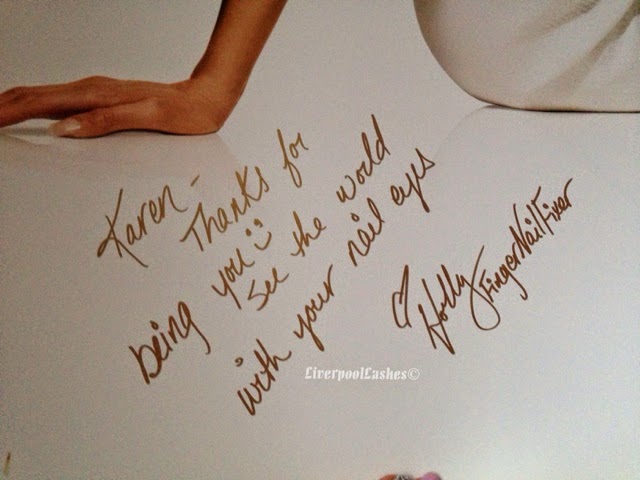