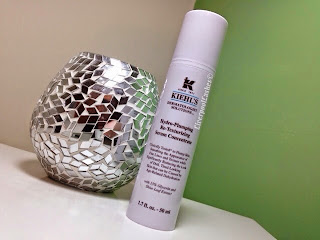 Following on from my post dated Wednesday 8th October with my review of Kiehls Hydro-Plumping Retexturising Serum Concentrate, I wanted to update it with my results over six weeks on and also update you with where I have been today.

Firstly, the update on the Kiehls Hydro-Plumping Retexturising Serum Concentrate because honestly as time has gone on it's given me better and better results, click here to read the original review.
I have continued to use my bottle throughout my holiday in October and now that I'm home, I have been able to come back to the Kiehl's counter in Debenhams, LiverpoolONE where they tested my hydration levels again.  When I was originally tested, my hydration levels were 31 and when I returned a few weeks later it has risen to 36 however I am delighted to reveal that they are now 44 which proves that Kiehls Hydro-Plumping Retexturising Serum Concentrate really does make a difference. 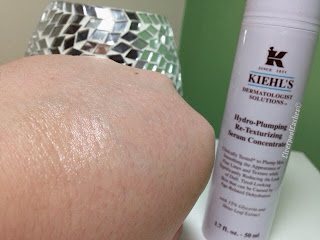 My skin feels so hydrated that I know, once I have used my bottle up I will definitely be repurchasing it.  I absolutely can't recommend it enough.
Now onto where I have been today which is back to the Kiehl's counter in LiverpoolONE as myself and my Mum were being treated to a VIP facial each.
I can't think of a better way to be able to try new products than to have a facial using them, you can really see the amazing effects they can give your skin.  I've never really thought of doing anything like this before, I've done it to trial make up but not skincare for some reason?!
Mum and I thoroughly enjoyed ourselves and Ellie who works at the Kiehl's counter has told me that in the New Year they hope to offer it as a service every so often which is really exciting! 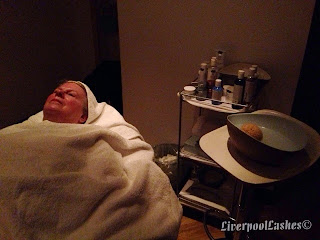 If you have any skin concerns or need any advice I really recommend that you pop into the Kiehl's counter in Debenhams LiverpoolONE.  The staff there are a fountain of knowledge and really work to getting you help and assistance with real facts - no jargon.
Posted by Karen Carter at 11:44 pm