It Goes Deeper Than 'Just Nails'

At Christmas I had a new client for 2014, give me a present.  Obviously presents are certainly not expected but it's nice the clients feel that way.  To be honest, this client started coming to me after being given a gift voucher from one of my existing clients and it was lovely that she continued to keep up with appointments but I figured that she just enjoyed having perfectly polished nails with her fortnightly  Shellac visits.  It was only when I read the tag she'd written "thanks for everything, it's not just about the nails, I enjoy the appointments."  It's the first time that I've considered what beauty treatments and the time they spend with us as a therapist actually do for my own clients.

My best friend Nic was with me today.  She's had rheumatoid arthritis since she was two years old which has obviously taken its toll on her limbs and she has little hands and feet.  She has limited movement in her wrists and fingers so in time I've learnt to adapt her treatments so that she rests her hand on a big 3 wick jar candle with her fingers over the edges so that she doesn't have to raise her arms to give me  her fingers but I can easily access them one by one.  I also remove the inner plate on my CND lamp so that her hand fits into it easier, it's these adaptations that make the service easier and more comfortable for the client. 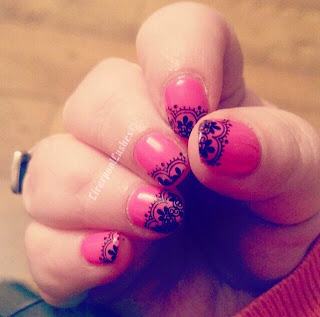 Anyway, I digress a little but today after doing her nails she did something rare which was to post the above photo on Instagram.  Underneath it she had written that she doesn't normally show her hands due to the rheumatoid arthritis but she loves them so much.  I feel like this says it all because a bit of colour and nail art stamping has given her the confidence to show her hand on Instagram and why not?  They're beautiful, I love her to bits so her happiness in them makes my day.

I have a client who hates her eyebrows, so much so that she chooses her glasses based on the frames that cover them the most.  Having never considered actually having the shaped properly previously, she decided to book for an eyebrow wax a few months ago along with her usual nail appointment.  The moment I did them and she saw them, I knew her thoughts on herself and the eyebrows that she'd hidden had completely changed.  Trivial to some but now she doesn't have to think of how to disguise them and is even considering contact lenses.

There's so much ugliness in this industry with therapists trying to outdo each other and companies trying to discredit others that it's good to look at the people that really benefit from the treatments and services.  They don't call is "beauty therapy" for nothing!  I do feel like it really is a lot deeper than "just nails" and I feel honoured to be able to have these sort of effects on people.
Posted by Karen Carter at 11:36 pm