Let me start off by saying that I'm not actually that keen on how these nails turned out however I figured I would show you anyway because just removing them and saying nothing would be a complete and utter waste of time where as at least me sharing these might spark an idea off with a colour combination or design. 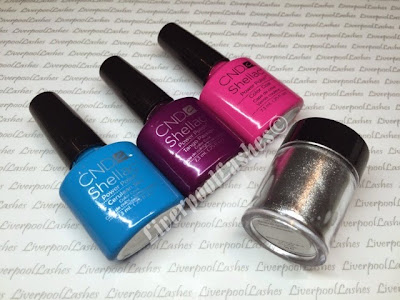 That aside, I wanted something bright on my nails.  The truth is when I applied CND Shellac in Hot Pop Pink I should have just stopped there as I really like that shade but I didn't of course.  I then applied strips of Tango Passion and Cerulean Sea, convinced I was going to adore them.  Once they were cured I patted Lecente Galaxy into the sticky later with a CND brush that look pretty similar to an eyeliner brush.  Since I wasn't thoroughly delighted I then decided to add detail to the pink and mixed a glitter paste of Galaxy and paint lines.  It's about at that point I decided I still didn't like them but I was in too deep at this point so I added a top coat and cured it. 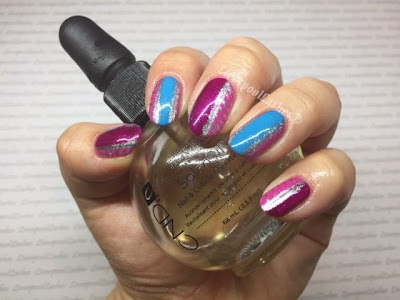 They're not the end of the world but since I had tried something with Tando Passion and removed it already I knew that whatever I went with I just had to complete.  Of course, these bad boys will be off in the not-so-distance future!
Posted by Karen Carter at 8:40 pm