I was keen to get started with my second week of my new food routine.  I have a lot of new things to introduce you to this week so settle down, grab yourself a Muller Light or something and let's get on with it! 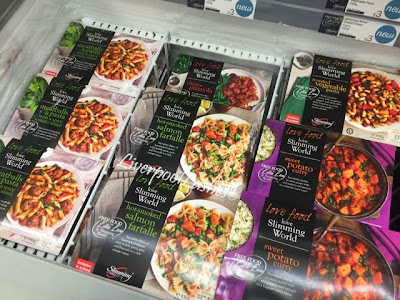 First I'll start off with the discovery that Slimming World have teamed up with Iceland to create a few frozen meals.  My husband and I raced along in the hopes that some of them might have been a low syn value. 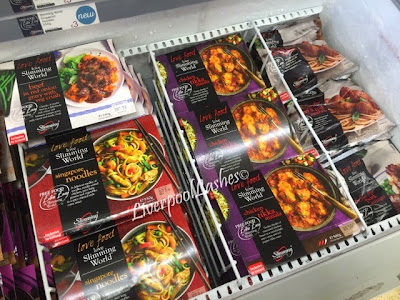 The two photos I'm showing you above are the entire range which is a shame because I would've liked to seen more but, beggars can't be choosers.  The good thing however is that everything you see in those photos are syn free!  I was completely gobsmacked.  We do try and cook from fresh but I think it's handy to have frozen foods ready too, particularly free ones! 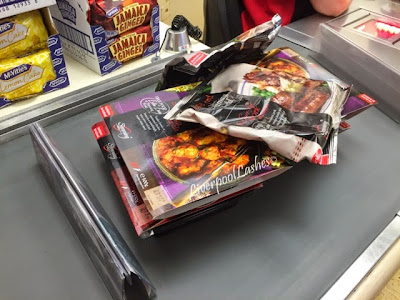 As you can see we both a few to try out I figured I'd let you know here on my thoughts on the different ones we bought which I thought might be helpful. 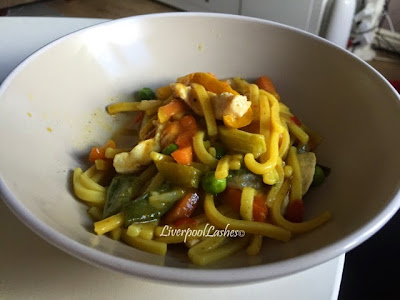 The above photo is their Singapore noodles.  The portions are decent, what you're actually seeing is half one of as my husband had the other half to try out.  As someone who is an utter wimp with spices, I would say that this was as spicy as I could take.  Everything was great apart from the chicken in it, unfortunately most pieces were quite dry.  I kind of wish that they would leave the chicken out so that I could just put in my own. 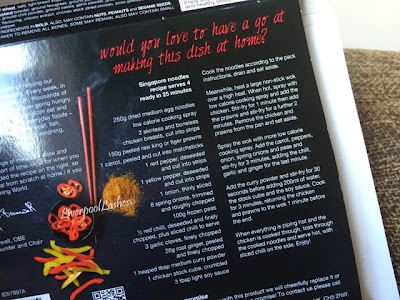 One thing I did like about this however, is that on the back of each of the meals is actually the recipe to make it yourself.  I felt like this was pretty unique as most brands wouldn't want to tell you how to make it because you would stop buying their version. 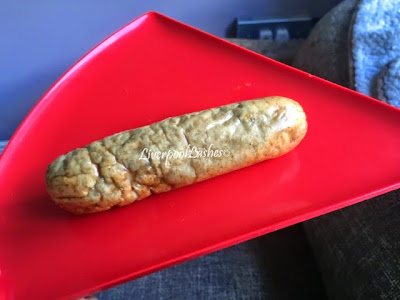 Next I cooked two of the Slimming World sausages.  My husband and I had one each and we both agree that the not very nice.  They have a texture that's not quite like meat and not really very much flavour to them either.  I think to use the other four up I should probably put them in a pasta or something just to get rid of them so needless to say, we wont be buying them again! 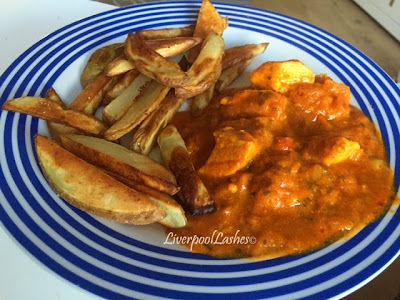 The last Slimming World meal I want to talk to you about was their Chicken Tikka. I had high hopes for this one to the point where as I actually bought two of them.  The flavour is fantastic and really authentic however once again, the chicken was pretty grim in it, dry and a little bit like it wasn't real chicken.  I just wish that they'd leave the chicken out because for some reason that seemed to be a problem in both meals.  Just to add as well, the photo above shows you half the pack but you don't get rice with it.  I do think that I would have this one again and hope that the chicken was okay. 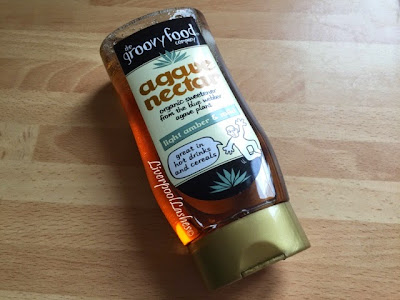 Like I said in my last post, I like to watch things so going to encourage me so when I came across a girl on YouTube called Rose Keats (click here) who makes Slimming World videos. I literally watched everything she did last Sunday.  The videos are good because she does diaries whereas she switches the camera on to film every meal.  By watching Rose I have come across some new foods that are either free or have a low syn value, one of them being a Agave Nectar which is a syrup-like sweetener that is half a syn per teaspoon.  You can buy this from Tesco and Sainsburys and its with the sweeteners. 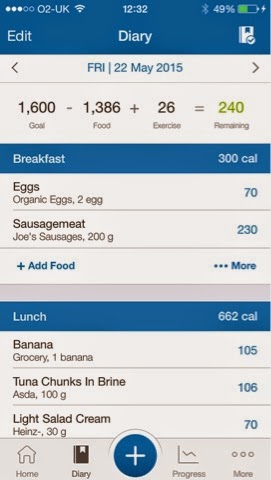 My next discovery of the week is the My Fitness Pal app.  I hear a lot about this app and to be honest, because I'm not exactly a gym bunny it's something that I just figured that I would have no interest in.  That aside, because the app is free I decided to download it anyway and see what it's all about and I have to say it's pretty ace!  It took me no time at all to create an account and then you input your details, your height, your weight, your goal weight, etc.  From there you then have a diary where are you log all of the food that you eat per day.  You can search for the products that you've eaten or you can actually scan the barcode on it and it recognises it (scanning things has amused my husband a little too much for a thirty year old man!)
Ultimately the app is more for calorie counting but it is a good idea because it shows you if you had your fibre for the day, etc and it's also a good way to actually remember any treats that you had as well.  The only thing is, because Slimming World isn't a calorie control plan I found that I have been sticking to Slimming World but also trying to stay within my calorie count (which you can set yourself.)  One good thing is that you can have friends on there, these friends cannot see your weight which was something that I was concerned with, they can just see what you've lost in pounds but unlike and support the things that you do, just like Facebook.  If you'd like to be my friend on there I would be glad of the support, just search for "liverpoollashes." 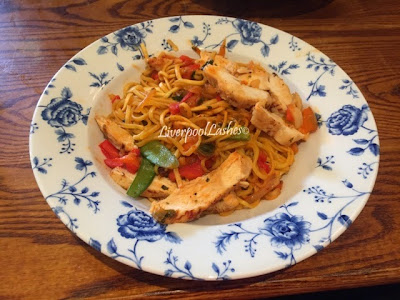 In the week I did actually go to Wetherspoon's for my lunch.   I chose their sweet chilli noodles with chicken which I adore.  The whole meal comes to just under 600 calories and in terms of Slimming World I believe it's around 10 syns.  We weren't celebrating anything special but I do think that it's a good idea to try and do normal things like going out for food and just picking a good option.  To me it just keeps a little bit of sanity as well. 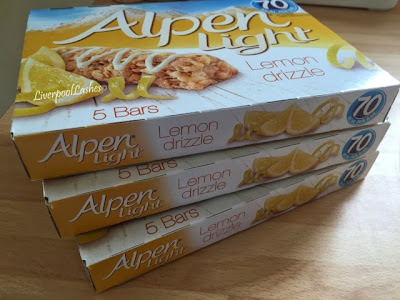 A random favourite thing that I've been enjoying has been Alpen Light bars in Lemon Drizzle.  On the Slimming World plan you can have two of these a day and as Asda currently has an offer on (3 for £3) I've been bulking buying them!  If you're calorie counting then these are a delicious dessert alternative. 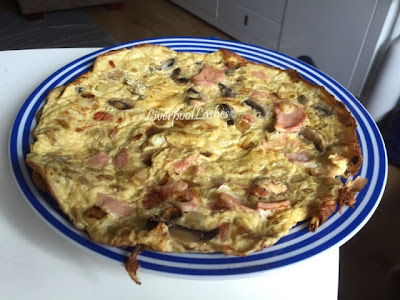 Apart from that I've been trying to half as many low syn meals so that I can use my syns on little extras like sauce, salad cream, etc.  If I make an omelette I do not use milk as I would rather my "Healthy A" (aka dairy) option be used on cheese for that day. 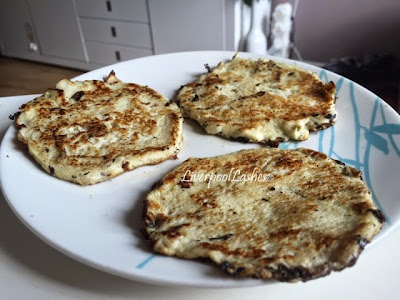 I did try to make the pancakes that Rose Keats spoke of, click here to see the recipe.  Slimming World say that mashed or blended fruit is synned as it doesn't fill you up but as they are just made from banana and eggs I don't bother counting it to be honest.  This is what the Agave Nectar is perfect for as it makes it a proper sweet treat either for breakfast or dessert and you could add fruit over it as well. 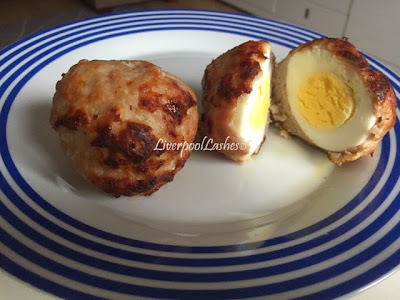 Another one of my favourite things to do is to make my own Scotch eggs.  There is a well-known company in the North West call Joe's Sausages they make sausages and burgers that are syn free on slimming world.  I have to say I used to adore them but I do think that they have changed the recipe to make them gluten-free and it's made them not quite as nice as they used to be.  That aside, they sell bags of sausage meat as well so all I do is I take boiled eggs, wrap them in the sausage meat and cook them and it's a completely syn free snack and a good thing to make if you were going out for the day. 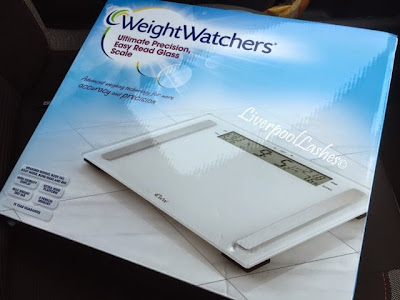 So it brings me to today as I write this.  I must admit I have been naughty and I have been hopping on the scales all week.  As I mentioned in my last post, I did believe that my scales were a little bit off as they were giving me different readings every time I got on them which was so frustrating.  The only thing I found about buying new scales is that when you look at the reviews of them, there's always someone that says that the ones you're looking at aren't accurate and it's been putting me off buying new ones.
That aside, I thought that I would struggle on with the scales that I already had however I really do feel like I lost a decent amount this week so when I got on the scales and it said I had lost 2lbs, I was really upset and felt like I had definitely deserved more.  Stomping back to bed (not going to lie!) I then had a mooch on the Argos app and found the Weight Watchers Ultimate Precision Electronic Scales that had all five-star reviews, literally no one had a bad word to say about them.  To make it even better, they were half price reduced down to 25 pounds!  I quickly got ready, did what I like to call a "five-minute face" of make up and dashed down to Speke Retail Park with my reservation number.  I ended up being there before the store opened and back home not long after.  Can I just say that the scales are amazing?!  they measure all kinds for you and although I've got on them a couple of times they always give the same reading so you can be confident that they definitely right.  So I suppose you'd like to know I lost?  Well I could've cried with relief that my hard work is paying off because I lost 5 pounds!  That brings me to a total loss of 9 pounds so far in two weeks.  I couldn't be more happy and I'm keen to start the next week.
Things to remember:
If you want to read my previous Slim Down Sunday posts - click here.
On another note, for all of the minimins.com users - you might be asking yourself 'what happened to minimins?'  'why has minimins been closed down?' 'Why can't I post on minimins.com?'  This is because unfortunately the owners have decided for it to close as they don't have the resources however one of the members has started a Facebook group for you to all stay in touch, here's the link:
https://www.facebook.com/groups/1741825406044089/
Posted by Karen Carter at 2:05 pm